If you follow the underground hip-hop scene (especially west coast), you should know him by name. Kansas City, Missouri born rapper Chief waKiL beat out thousands to become the 2014 winner of LA’s Power 106 Who’s Next— a battle of underground rappers vying for a spot to open at PowerHouse 2014 with Nicki Minaj, YG, Trey Songz, Childish Gambino, Wiz Khalifa, and a slew of other artists. Luckily, I got to see him in a more intamate venue at LA’s Los Globos on Sunset. Shout out to Chief waKiL for the interview! 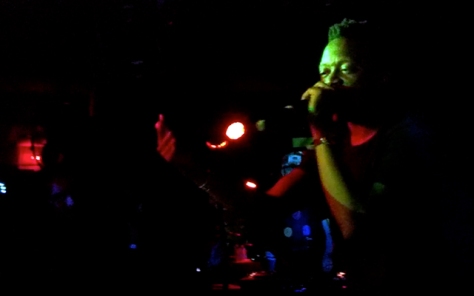 Where are you from?

How long have you been performing?

I’ve been performing for 10 years or so.

Was this your first time performing at Los Globos?

How would you describe your music?

My music is a breath of fresh air. It’s real and entertaining all at the same time. It’s pure awesomeness at its finest.

Who are your (musical) influences?

As far as rappers go it’s Eminem, Kanye, and Andre 3000…I get musical inspiration from all over though. I love to listen to movie scores and alternative music. I definitely love the 90s music that I grew up on.

You came upfront and said you decided not to prepare a set. That takes guts. How did you get so confident on stage?

Well I’ve been performing for so long I feel like I’ve mastered the art of controlling the crowd. I feel like if I’m as free as possible on stage and I embrace the fact that it’s live then there’s nothing that can stop that performance from being golden…unless I don’t show up or something. Haha

What advice do you have for people who are aspiring rappers/artists/performers?

Being myself unapologetically brought me a long way. The best thing you can do for yourself in the long run is stick to your guns. Stay humble of course but KNOW WHO YOU ARE. Nobody can take what you KNOW from you. Nobody.

Finish the sentence: Chief waKiL is…

The next big thing.

I gotta ask—what’s your government? And how did you get the name Chief waKiL?

Mansa Wakili. My dad is from Nigeria. After a slew of horrible rap names, my cousin Eric aka Lanzky (also a rapper featured on my album) convinced me to go by waKiL. The name grew on me and I slapped a “chief” on there. Come to find out my last name meant chief amongst other things. I’m contemplating dropping the chief though. I don’t know yet. It will definitely always be apart of my name though.

What was it like being the 2014 winner of Power 106 Who’s Next and performing on stage at PowerHouse New@2?

It was amazing. I felt I would win, but it was still a rush. I play back the moment constantly. I’m super happy and I feel blessed to be chosen. I honestly felt it was meant to be before I was even determined the winner. I got next no doubt.

What’s next for Chief waKiL?

Videos mainly. I’ve never been one with a lot of videos and visuals. The fans haven’t really been able to connect with me in that way. That will change. I feel like that’ll push things to another level. I also plan on droppin music here and there. I’m in thinking mode as far as my album goes. I do SO much stuff musically outside of just rapping that my one is constantly occupied.

Where can we find you?

Facebook/YouTube/soundcloud/twitter.com/chiefwakil. Also follow my vine. Chief waKiL…honestly if you put this name anywhere you’ll find me.

A blog for strugglin' artists